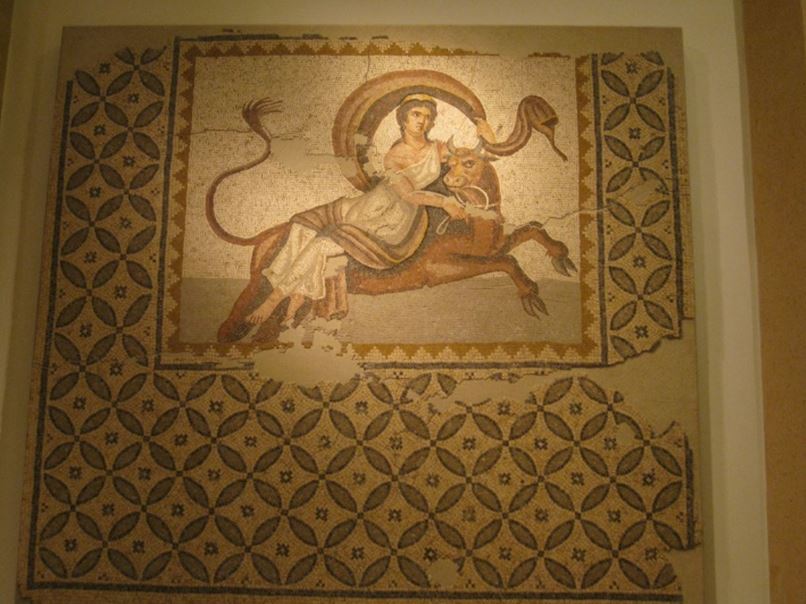 The logo for the Conference, as well as the avatar for its social media pages, is adapted from a decorative border motif in the Europa velificans mosaic, now in the Beirut Archaeological Museum. The mosaic, which dates from the 3rd century CE and was discovered in the ancient city of Byblos, depicts Europa seated on the back of a bull (the god Zeus in disguise) under the arc of her billowing veil.

It was the decorative quatrefoil in the border that intrigued us most, particularly the way the four petals seem to meet but not merge at a point of encounter and exchange. The cardinal points of a compass, the North and South and East and West of Europe? Or perhaps nothing so specific. Just four petals, four ellipses, each a separate yet integral element of a greater entity.

Curiously, the quatrefoil that is formed by the petals is in turn inscribed within a larger square. At the same time, each petal constitutes one of four “walls” of another enclosure. It is both inside and out, core and shell alike.

Given the increased inquiries about the Conference and taking account of the unfolding events with the War in Ukraine, the Organizing Committee of the Europe in Discourse decides to extend the deadline. Consult the Call for Papers here and submit your paper to discuss Europe, its past and future.